As time goes by

The making of a Garden Oasis 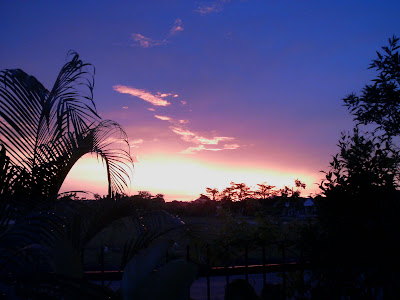 Sunset view from the main door. 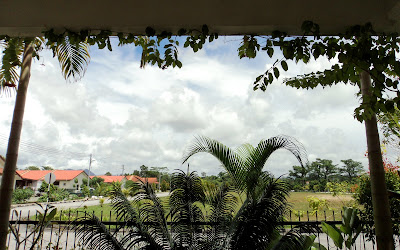 A view on any day . Note the Drunken Sailor's ability to climb over and creep along the front porch's ceiling.

When we decided to move to Kuching about three years ago I was intent on making the house garden an example of my concept of the Malaysian Garden called " Laman Kambatik". In this post I would like to share how I achieved it at the front porch garden space. In later posts I shall talk about other sections of the house garden .
Over time one or two plants that did not do well were replaced with alternatives but to a large extent the original choice of plants proved suitable. To help me explain the job I have prepared a sketch below that could act as guide in recapitulating the making of the front garden. The front garden will hopefully mature in about a year's time from now when other garden features ( hard landscaping) will be added. At this point of time the focus is on soft landscaping i.e. the cultivation of plants and turves. On this note I would add that the latest feature is the Yellow Bamboo ( shown inset) that took the place of the Murraya paniculata after I noticed it was unable to fend itself from diseases that attack its roots. 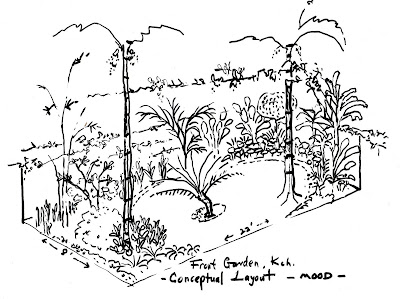 In the beginning - date of photo 25 Nov' 2007
The above shows how the site looked like in late 2007. The plant worth noticing is the Carpentaria Palm ( Carpentaria alexanderae) which was just less than a meter high when planted. The broad-leaved Calathea lutea is an important plant in the design for the shape of its leaves. The soil is hard and not fertile and I only managed to top-up the whole area with good topsoil later when I decided to turf the space. All these plants were brought from my garden in Bintulu. I did this to save me time to scout for plants in Kuching besides I can load plenty of plants at the back of my pick-up every time I drive to Kuching.
Progress dated : 7 June 2008.
The above is view of the site in slightly less than a year. The tiny lawn has been turved. The Ixora coccinea is flowering beautifully with orangish blooms. The Blood Banana in the far background is seen higher than the Carpentaria Palm. The Sea Cycas ( Cycas rumphii) and Calathea are doing well evidenced by the dark green colour of their leaves.
Progress dated : 14 June 2008.
The Sea Cycas was also brought from Bintulu. Around the base of the Cycas tree are variegated rhoe plants. The lawn is planted with " Pearl Grass". A line of 'Mother-in-law's tongue' ( Sanseivera trifaciata) is seen planted along the concrete edge.
Progress dated : 4 December 2008.
In a year's time the Carpentaria Palm has risen 5 feet tall. To the left of the picture is Murraya paniculata which produces tiny white flowers that are strongly scented.

Unfortunately the Murraya plant did not perform well and last month I replaced it with the Yellow Bamboo.
In the design of the front garden the role of scented plants is emphasised. Another species included is the " Sepenuh" -Proiphys amboinensis

Inset to the left : Close-up of the tiny and scented white flowers of the " Kemuning" in Malay. It's scientific name is Murraya paniculata.
Progress dated : 25 Jan 2009.

Progress dated : 4 June 2009
The Drunken Sailor ( Quisqualis indica) grows luxuriantly and crept unnoticedly along the fence and then over to the front post post.

A new generation of young fronds thrust itself into the garden space. I chose this plant for the main reason that it is native to this part of the world and exudes a primitive look, a species that appeared to be taken from the age of dinosaurs.
Many people in Sarawak cook the young fronds as vegetables.

Progress dated : 4 Feb' 2010.
After about slightly more than 2 years the garden is shaping up according to plan. For more bright colours the Yellow Croton (Codiaeum variegated) is added. At the lower storey ( not seen) many numbers of Iresine plants ( Iresine herbstii) are planted for its deep red colours. The feather-leaved palm behind the Sea Cycas is the Yellow Cane Palm ( Chrysalidocarpus lutescens) which is a small-sized palm.
Progress dated : 4 June 2010
Whooopi !! the Carpentaria palms have grown 15 feet in three years.
Three years in contemporary age of the Internet is virtually unfelt. It has whisked by like the fallen frangipani petals at the front garden. Kept by a busy schedule of travel from Bintulu to Kuching and back on an almost monthly basis I have not wasted the window of opportunity to create a much needed urban oasis a step out of the house. I will of course add a little bit of smaller plants to hug on the lawn floor in future but this will have to be thought judiciously especially on the maintenance aspect because we're not everyday in Kuching. Unlike trees, smaller plants require more intensive care. After all we're always rewarded by the basics first and pretties are added bonuses.

Please click on the link below to browse an earlier version of this blog:~ My Sarawak ( 1st Ed. )
and even earlier :-
My Kambatik World

I am an eco-citizen

A tree a day group@facebook.com/ 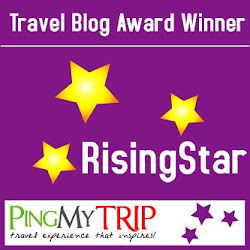 Many thanks Jay and Harry for the award !

MORE BLOGS ON MY INTERESTS
below:-